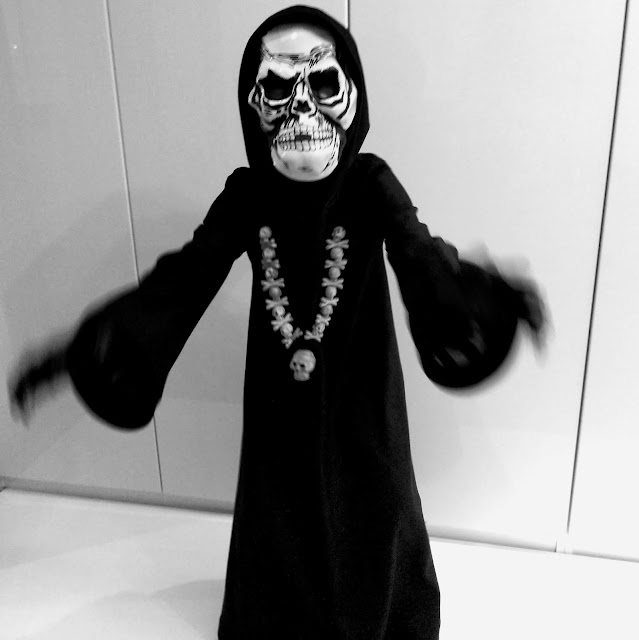 Halloween is not big here. It is an imported holiday and is just commercial and superficial ... but there have been a few events for kids on kindergarten and school and dressing up is so fun for the kids. Previous years I got by with store outfits but this year I asked Andrei what he wants to be. His answer was Slender Man and took me by surprise. I was not quite aware that he was over superheros! I told him I don't think I can put together a slender man costume in less then a week and asked him to keep thinking and showing him options I could buy! He rated almost all the costumes available as childish and didn't got much interest in any untill from search to search he got to some adult grim reapers and zombies costumes with nice make-up and then his face light up, literally! So considering what he liked and what I thought I could do in a short time frame he choose to be death! There were some cheap satin robes I could buy but they all look so cheap and ill made and unattractive! So I decided to make the robe myself!
I considered a few robes patterns but none looked exactly right to me. Even if I had little time I lost a lot of it choosing a pattern and a fabric!
In the end I decided to draft the robe myself starting from a hoodie pattern from Ottobre. I just love the front cross over hoodies they have - looks stylish and covers the neck nicely: 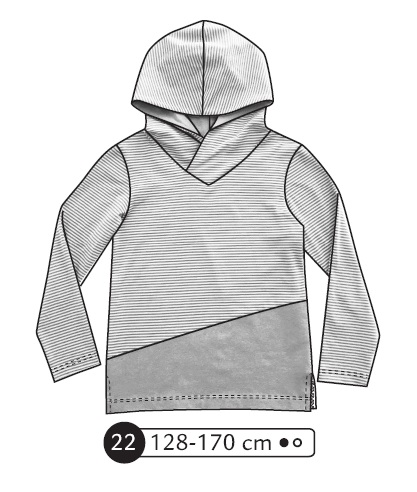 I changed the shape of the hood to trail on the back a bit and slashed the sleeves for more drama. I went for a A-line maxi dress with it and the heavy twill I choose was so so perfect for it! I could not believe how well  it draped in this fabric and how reached it looked compared to the cheap satin ones! 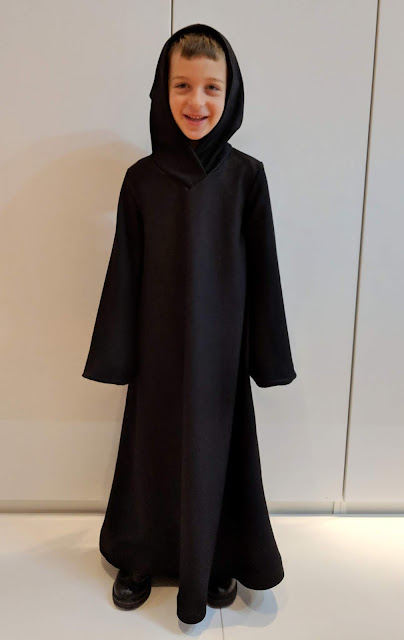 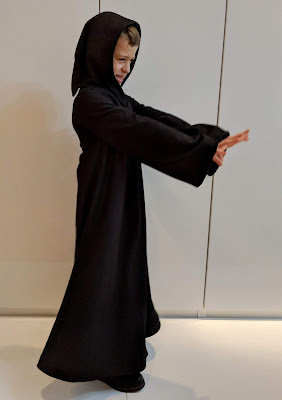 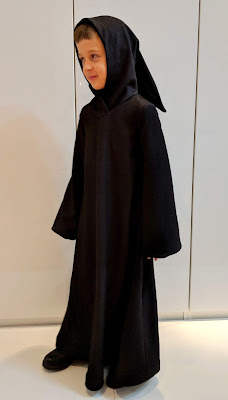 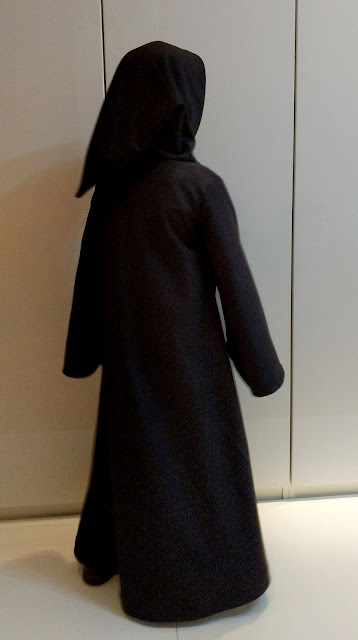 To make it a little different I added black and white striped batiste lining to the hood and sleeves! Great effect! 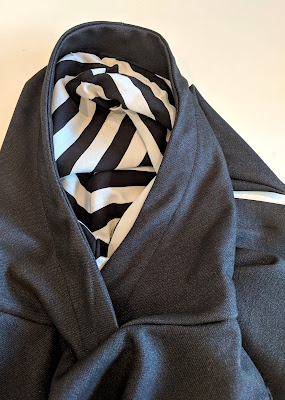 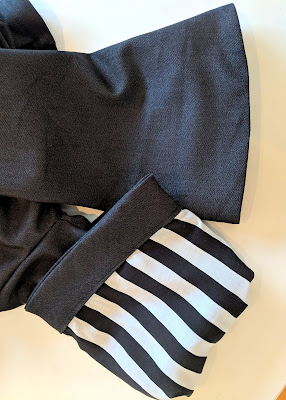 I bought professional latex makeup for him but his party at school started very early in the morning with his classes and also thought he might to be comfortable with all that makeup so on the last minute replaced make-up with a cheap plastic mask he could take off at any moment. We trayed some latex masks as well who were better looking but he could not stand them over his face! It was nice that his hood covered the neck as well! I also got him a pair of black latex gloves and a skulls necklace! He was pleased with his outfit! And so was I! 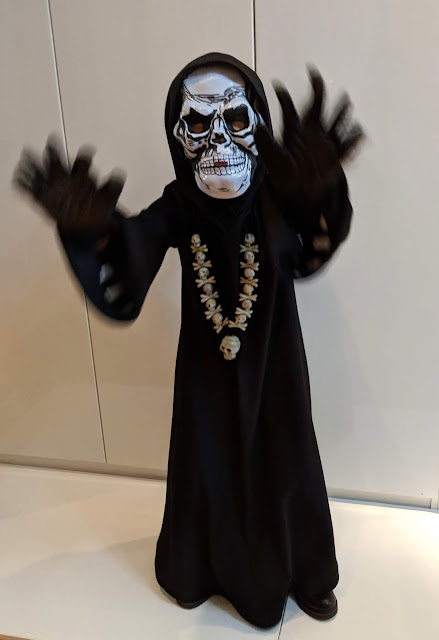 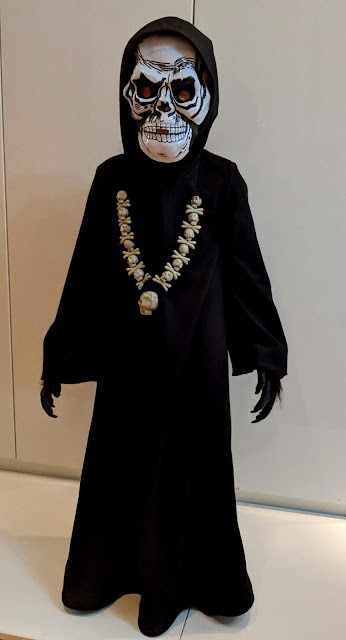 I had bigger plans to add some bloody hand embroidery to the robe and a few other creepy elements but never got around to do it! I took great pleasure in seeing how nicely the hood, the shoulders and everything was actually fitting him.
Posted by Georgia at 3:44:00 PM 4 comments:

Georgia
I am software engineer by day. I am also the mother of a lovely boy and girl. But what I like to do in my free time is to SEW ... I really like to challenge myself and take on ambitious projects more difficult then my skills or just keep doing same simple things but trying to find my own way and a new interpretation with each iteration . I also love FABRIC and some days are more about collecting fabric then sewing it. I learned most of what I know online and here I find so much inspiration. So in return I'd like to share details about my sewing journey as well. My goal is to create my own wardrobe and my children's and fill it with clothes you cannot shop for, clothes that are unique, clothes that are mine. My time and my skills are limited but I try to do my best and have a lot of fun with it. 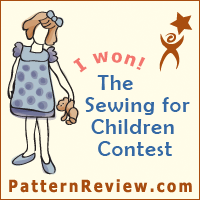 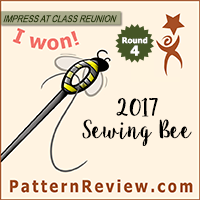 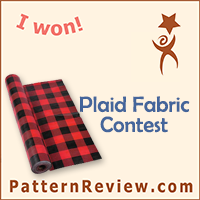 #2 in the red carpet contest 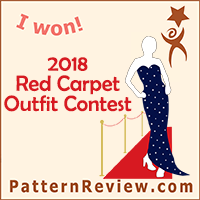 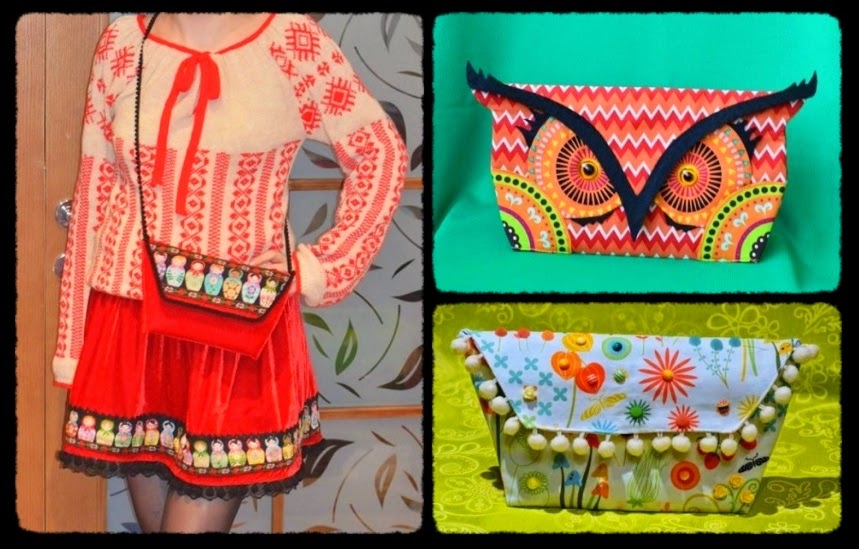 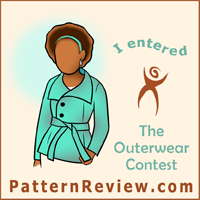 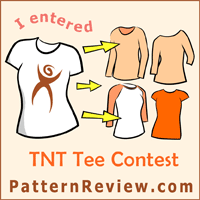 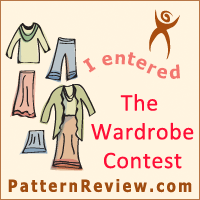